Quit With The "WB & DC Comics Has A 'No Jokes' Rule For Their Movies" Rumor Already!

The latest rumor going around is about how Warner Brothers and DC Comics' are imposing a "No Jokes" order for their movies - suggesting that DC movies are going to be super dramatic, serious, and humorless.

WHAT IS THIS STUPID RUMOR BASED ON?! Apparently someone was asking SOMETHING about the several DC movies that are in the works right now, and the comment from inside WB was "No jokes".

Those spreading this rumor - DO YOU NOT UNDERSTAND A LITTLE THING CALLED CONTEXT? What was the actual comment or question that this "No jokes" thing was a response to? I don't know! WHO KNOWS? Nobody has provided a QUOTE for the QUESTION THAT WAS ASKED to give any CONTEXT for this apparent "No jokes" answer from WB-DC. 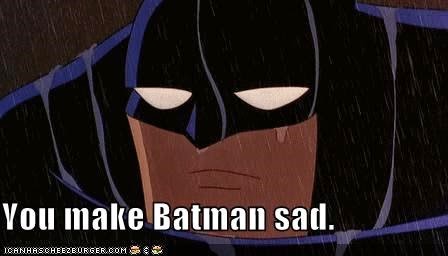 Do people actually think that WB is giving the order to have "No jokes" in their DC movies? Tell me, which is more likely to be the case with this apparent "No jokes" thing;

1. Reporter: Wow WB, are you really going to be making 7 or 8 DC comics movies in the next few years?
WB: We are, no jokes!

2. Reporter: For the several DC comics movies you have on the schedule up to 2019, are they going to have much in the way of humor, wisecracks, or jokes?
WB: Oh, our movies will have no jokes.

All the debate about this supposed "No jokes" dictum by WB are just wasting everyone's time. Think about it! The story is just CLICKBAIT, people! Don't be stupid!

Yeah, I know that all anyone seems to care about these days is the headline and pageview count, and I know "professional" journalism is in a horrifying state in 2014 - perhaps even more so in the entertainment sphere - but please folks, take a minute to ASK QUESTIONS about a rumor before you kick it down the line! You'll do your reputation a favor in the long-run.
Posted by Dean at 9:07 PM