Ok, it should come as no surprise that I'm a comic book fan, but along with reading comics, I often like to throw the headphones on and listen to some podcasts about comics. There are a bunch of them out there, but not all are that great...

There's one that I keep going back to as my favorite though, it's called the Major Spoilers Podcast - "the podcast for comic book and pop culture fans". I look forward to this podcast more than any other comics podcast - and don't worry, they don't actually "spoil" much - 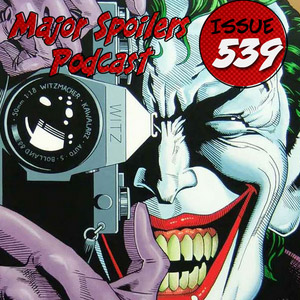 What makes it great is the interesting make-up of the group; An in-his-early-40s film/media teacher & dad, another in-his-early-40s dad who works at a comic store with an encyclopedic knowledge of the genre (and a big fan of Japanese Power Rangers aka "Super Sentai"), a guy who grew up in Mexico with an off-beat taste in comics and pop-culture, & an early 20s film student who has only been reading comics for a couple of years.

Go give it a listen and see what you think!

(And hey, if comics aren't exactly your thing, they also produce other podcasts about movies, tabletop games and more!)

Do you know of any other really good comics podcasts? Comment below and let us know!
Posted by Dean at 10:59 AM

Email ThisBlogThis!Share to TwitterShare to FacebookShare to Pinterest
Labels: Comics