Ok, it's Affleck... But don't forget about Cavill!

Ok, after reading some articles, and having some time to think about it, I'm feeling cautiously-but-curiously-optimistic on the casting of Affleck as Batman. When you think about it, Ben Affleck is likely to have a lot of input as far as the direction of this Batman/Superman film, and after The Town and Argo, he's proven himself to not be a slouch in that area.

Also, Affleck will add some star power to the movie. If the reports are true, he has signed up for "multiple" films, which almost certainly includes solo Batman installments and a Justice League flick or two, which will give Batman some stability for a while.

An added benefit to Affleck's big casting announcement is that his high profile and public awareness has signified a clean break from the Nolan version of Batman, clearing up a lot of confusion for the average non-geek movie-goer when they eventually do enter the theater on July 17, 2015


Now that Warner Brothers has decided this is the way they want to go for a Man of Steel follow-up (as well as a re-introduction for Batman) all I can say is that they'd better get it right! Oh, and WB, I want you to remember something... 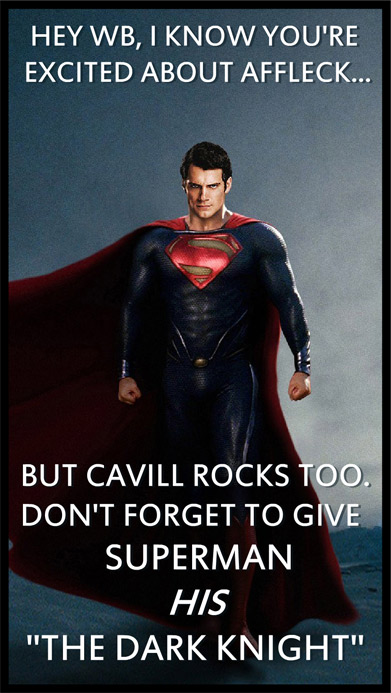